If you’re reading this article and trying to figure out how to stop rugs moving on carpet, you must’ve just bought a fabulous new rug. And you’ve probably spent a lot of time thinking about where you want to put it. But it’s just slipping and sliding all over the place, ruining your decor, and most likely making you trip.

If that’s the case, there’s really no need to worry or get frustrated anymore. Today, I’ll show you the absolute best techniques that I’ve found to prevent rugs from moving on the carpet. Let’s get into it.

Why Do Rugs Move on Carpet?

Sometimes, I’m sure that it seems like your rugs have minds of their own that are making them move. Or, it could be because of ghosts and monsters living under your bed. But luckily for all of us, it’s neither of the two, and there’s actually a pretty simple answer that explains the movement — pile direction.

Rugs, as well as runners and mats, move in the same direction as the pile that’s beneath them. That would be fine and well if your carpet pile didn’t move every time you stepped on in it.

So now that you’re standing on your rug that sits on top of the carpet, both of the pile directions will start moving. Over time, it will go further down, until you put it back in its place.

You’ll also see your rugs moving a lot after vacuuming or if you put a rug on your stairs. Since the pressure your feet are applying is higher, the rug will move even more, which is just a huge hassle.

Also, your rug or runner will glide even further if it’s plushy and long. What’s more, it’s much trickier to get a fluffy rug to stick to a carpet, so keep that in mind.

7 Great Ways to Stop Rugs From Moving on Carpet

Let’s get down to it and answer the question How to stop rugs moving on carpet? once and for all. Here are the seven best techniques that will save you a lot of frustration in the future.

While you’re down at the carpet store, you should pick yourself up an anti-slip mat because it will do wonders. It is probably one of the easiest, and least messy ways, of stopping your rug from moving and slipping away. Also, you don’t need any special tools to make it work, which is perfect for those of you who aren’t handy.

With your anti-slip mat in hand, separate the carpet and rug, then put the mat between the two. Et Voilà — you’re done! There’s not much more to it, except for picking the right one.

Since you’ll be putting it between fabrics, it’s best that you get a polyester mat because it’ll adhere better. It also won’t damage your carpet or rug, and you’ll be pretty much set for life.

You could also get a rubber anti-slip mat, but you would need to replace it at some point. Even though it’s pretty effective, rubber can (and will) deteriorate over time. Once it starts rotting, it will become sticky, and could potentially ruin both your rug and carpet. So it’s best to steer clear and just buy a polyester mat.

Using sticky tape to hold your rug in place is probably one of the oldest tricks in the book. Again, it’s pretty low effort, and you only need the double-sided tape to make the two stick. But here’s the thing, it has to be the right tape because the wrong one will destroy your carpets.

I also want to say that you might want to avoid this method altogether if you’ve got an expensive or oriental carpet. There’s just no point in potentially damaging your carpet, so you’re better off using an anti-slip mat.

If you’re not sure which one to get, I recommend the YYXLIFE Double-Sided Carpet Tape because it’s worked so well for me. You could also get XFasten Double-Sided Carpet Tape if you want a bigger selection of sizes. Both of these are specifically designed to go over carpets, which is key. That means there’s no chance that they’ll leave a glue residue when you take them off. 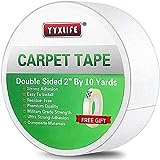 Another thing you should know about tape is that, no matter how good it is, it will collect dust and debris. When that happens, it’ll become less effective, and you’ll need to replace it.

Now, with your trusty tape in hand, you need to start sticking all around the rug’s perimeter. For the best results, put the tape about two inches away from the edge. You should also put a few strips smack-dab in the middle of your rug, just in case. Since the tape is double-sided, it’ll adhere to both the rug and carpet, and stop any and all movement.

3. Caulk It in Place

If you’ve got a cheap rug, and don’t mind sticking some caulk on it, then this method is for you! Not that it wouldn’t work on an expensive carpet, but it just doesn’t make sense to smear caulk on such a luxurious fabric.

Anyhow, get your favorite bottle of caulk, and maybe a caulk gun, and start applying it in little dots along the edges of the carpet. If you don’t know which one to get, I’d recommend you check out this article. Once you’ve applied the dots, take a putty knife or something similar, and squish them so that they stick better. You can also put a few drops of caulk in the middle of the rug.

The trick with caulking and understanding how to stop rugs moving on carpet is making sure that it’s fully dry before you flip the carpet back over. Otherwise, it might stick to your floors as well, and that’s just a mess that you don’t want to deal with.

It wouldn’t be a proper tutorial on how to stop rugs moving on carpet if I didn’t talk about a hot glue gun. Basically, instead of messing with caulk, you could get a glue gun, and do pretty much the same thing as you’d do in the previous method. Apply dollops of glue on the edges of the carpet, wait for it to dry, and flip it back over.

But a word to the wise here — don’t use latex glue instead of silicone. Latex glue isn’t as long-lasting, so it will rub off pretty quickly. When that happens, it’ll stop being effective, and your rug will start slipping again when you least expect it.

Using glue, caulk, or even sticky tape can get a little bit messy, which is why I also like anchoring rugs. Even though it’s not always possible, it’s usually one of the easiest methods to get your rug to stay in one place.

If your rug/carpet combo is in the living room, you could put a coffee table or chair over it to prevent slipping. On the other hand, if it’s in the kitchen, you might try putting a fridge on top. Not only will it anchor your rug, but it will also protect your carpet from the leaky fridge.

One thing that’s really going to help your anchoring efforts is flattening the corners. This step is crucial when mastering the fine art of how to stop rugs moving on carpet, and it’ll save you a lot of money. 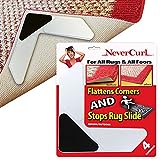 Say that you’ve already bought an expensive rug or carpet, and now it has corners from you tripping over it. Instead of shelling out more money to buy a new one, you could just get the NeverCurl Rug-Gripper.

It consists of V-shaped corner grips that you can easily stick to any rug to get it to flatten out. It’ll stick to your carpet (and even floors), and you’ll never have to worry about raised corners again.

You could also try to straighten the corners with some carpet pins. By driving them through the rug, and into the carpet, you’ll prevent curling and slipping at the same time. I recommend getting clear pins so that they don’t clash with your rug/carpet scheme.

Velcro does pretty much the same thing as double-sided tape, but it’s more durable. Also, if you stick it on right, you won’t have to change it for a long time. That being said, it is a larger DIY project that involves a lot of cutting and gluing.

First, you’ll need to buy an MDF board, and cut it to the size of your rug. That’s what’s going to help keep the rug in place, and where you’ll stick the velcro to. Now that it’s cut, put the tape around the edges, and a couple in the middle of the board.

To ensure that the hoops and loops are properly sticking to each other, mark both the rug and the board before you begin. Then, lay the rug over the board, and put all of that on the carpet, making a kind of sandwich.

Again, I do know that it sounds like a lot of effort, but it’s actually a long-term solution to keep rugs in place. So if you feel like other methods have failed you, I suggest using velcro.

Why You Should Stop Your Rugs From Moving

Of course, you should learn how to stop rugs moving on carpet because it’s one of the most annoying things in the world. But it can also be really dangerous.

Having a rug with wonky corners is a huge trip hazard, and someone could easily hurt themselves. It’s especially scary if you’ve got kids or people with a limited range of motion living with you. So for yourself and for them, you need to fix your carpet and rug as soon as possible.

However, it’s not only the corners that cause issues, it’s the slipperiness, too. It might not be as severe as wet floor tiles, but someone could still take a nasty fall. Honestly, no good could come out of leaving your rug as is.

That’s all I have on the topic of how to stop rugs moving on carpet, and I really hope that they work for you. But here’s my last piece of advice — don’t stress too much. Even if one of these methods doesn’t do the trick, I’m sure that another will. 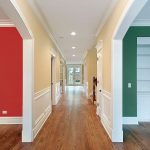 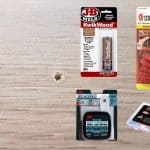 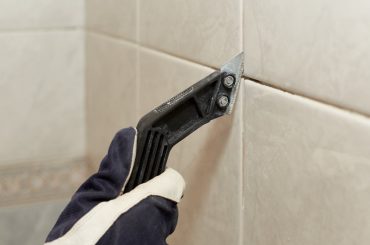 How to Regrout Tile Without Removing Old Grout 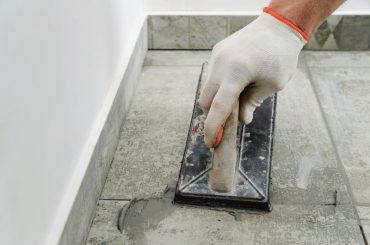 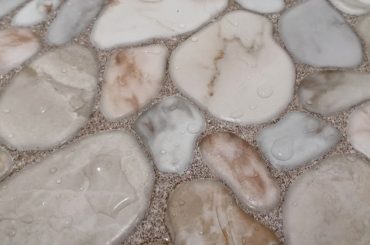 Pebble Shower Floors: Pros and Cons You Should Be Aware Of