There comes a time in everyone’s life when they need to buy some new furniture. Sofas, armchairs, and couches have a limited lifespan. And while you can do many different things to breathe new life into your old piece of furniture, wear and tear will be inevitable.

As such, you are left with a hefty item that you need to get rid of somehow. The question is, what is the best method to do it?

In this article, we will focus on various ways to dispose of an old couch. You will learn how to do it in a way that won’t harm the environment. In fact, you might even end up earning some money on the side or helping someone in need.

Most people will immediately think of throwing the old couch away, which is understandable if it’s in a terrible condition. Of course, if the couch is still stable enough for people to sit on it, you might want to try and refurbish it first. In fact, proper reupholstering can get you some interesting and creative results.

Naturally, reupholstering takes time, and you might even have to spend a bit of money to do it properly. Hiring someone to do the reupholstering for you will also result in you paying out of pocket. Of course, you could have spent that money buying a new couch.

Ultimately, it all depends on the frame and the legs of your old couch. If they’re sturdy enough, you might simply reupholster. Otherwise, removal is the best option, but that doesn’t necessarily involve a trip to the junkyard.

If your couch is in a decent condition, but comes with a few stains here or there, dumping it would be a huge waste. Of course, if you’ve already ordered a new couch, you won’t exactly have room for both. The old one will have to go at some point. So, instead of throwing it away, consider donating it to a charity.

There are millions of Americans who can’t afford even the most basic of things, like furniture and kitchenware. So, that very couch you want to get rid of might save someone thousands of dollars and help them live life a little bit better off than before.

Luckily, there are plenty of organizations out there like Furniture Bank, Goodwill, or Greendrop, that will gladly take old furniture and provide it to the less fortunate. Furthermore, you can donate the couch to a local church or a religious organization that specializes in helping the community.

Naturally, you can’t exactly donate anything to these organizations. A busted couch with massive holes inside will not be of any use to anyone. If there’s minor damage to the couch, that’s perfectly fine. But it still might be a good idea to do some basic reupholstery and cleaning beforehand.

One major perk of donating to a charity is the fact that you can deduct the donation from your taxes. However, the organization you donate to has to be registered with the IRS. You can learn more about it directly from the IRS website itself before you decide on the donation.

Old, used furniture is quite sought after in online retail. After all, the average price of a new sofa is around $1000, and most high-end models are far pricier than that. Sometimes it is worth paying that much, especially if you want a model that will last for a few decades. But most people aim to save as much as possible, so they turn to Craigslist and eBay for decent, slightly used furniture.

Of course, Craigslist and eBay are just two out of dozens of platforms out there that you can use to sell your old couch. In fact, the great thing about selling used items is that you can quite literally sell anything.

For example, if you have a completely busted-up smartphone that barely switches on, you can still put it up for $5; various YouTube channels that handle restorations and repairs will buy it off and either repair it or use it for parts. You can do the same with old furniture, including couches.

But before you put that ad up, you have to consider a few important details about selling used furniture:

Dismantling the Couch for Recycling

Do you happen to have a couch that is literally falling apart? No worries, you can still use some of its parts for different purposes. However, in order to do that, you will need to learn how to break the couch apart. Luckily, there are plenty of guides online that can help you do just that.

Once your couch is in pieces, you can recycle all of the parts you don’t need. For example, you can use the wood from the frame as kindling or as composting material. Furthermore, you can create new furniture or other wooden items with a little DIY creativity.

Cushion stuffing can also be reused. But if you plan on taking it out, make sure to wear proper protection since it can contain harmful materials. In addition, you can reuse the old cushions from the couch as floor seating cushions. You can even use the extra upholstery if you plan on sewing or refurbishing a different piece of furniture.

Some couches come with metal wiring, which can sag over time and lose its strength. If you remove it carefully, you can recycle all that metal and earn a decent sum from doing so.

Trading It In/Giving It Away

People love getting stuff for free. So, if you feel like you’re in a giving mood, you can always offer your couch up for free.

There are several ways you can do that. The most popular option is to post a ‘free couch’ ad on Craigslist or eBay. But if you don’t feel like hauling it across the country, simply place an ad in your local community paper.

Furthermore, you can leave the couch in front of your driveway with a note that reads ‘free couch’ and if you see someone who’s interested in it, talk the trade over with them and let them know what they’re getting.

Of course, you can always try to trade the couch for something else. Browse your local ads and see what the neighbors are offering. If they happen to have something that you might need, like a piece of furniture or an appliance, discuss the trade with them and let them have the couch. Not only are you getting rid of an old piece of furniture that way, but you’re also getting something tangible in return.

If all other options fail, if you can’t sell, trade, or give away your couch, then the only other option remaining is to get it to a landfill. However, that in and of itself isn’t easy. In fact, there are many options for you to consider, and each comes with its own set of pros and cons.

A lot of people who want to get rid of large pieces of refuse tend to rent a roll-off dumpster. These massive dumpsters can handle huge loads, are easy to mount on roll-off dump trucks, and are just as easy to drop off anywhere you need them to be. And best of all, most roll-off dumpster rental services know exactly how to handle old furniture — after all, it’s one of the most common types of cargo they carry.

With that in mind, you can rent a roll-off and arrange for it to pick up the old couch anywhere you want, even in front of your own home. However, the biggest setback here is that these services don’t come cheap. Naturally, you can make the best of your rental and dump additional waste material on top of the couch. Make sure to discuss any additional services with the rental company before placing an order.

Taking It to the Landfill Personally

Sometimes, impatience gets the better of homeowners, so they decide to simply strap the old couch onto the car or stuff it in a rented van and take it to the landfill themselves.

That is definitely an option you can consider, but it isn’t cheap either. After all, you will be wasting gas money to get to the nearest landfill, and they might not even have room for an old couch there, so you could be driving over there for nothing.

So, unless you have a decently sized van and you call the landfill beforehand, don’t try this option.

Leaving It at the Curb

It’s a bit of a cliche at this point, an image of a suburban American home with a used couch dumped at the curb, by the driveway, waiting for the dump truck to pick it up.

And yes, there are definitely communities where garbagemen will handle huge loads like old couches. However, that isn’t the norm, and some areas might even slap you with a fine if you do that.

So, if you decide to leave your old furniture at the curb, make extra sure that such an act is legal in your city.

Interestingly enough, sometimes a delivery service that brings over your new couch will be happy to take your old couch away. After all, they have to deliver furniture in big trucks, so they’ll have room to take yours away if you need them to.

So, when you order a new couch, ask the delivery company if they take old furniture and what the potential fee might be for that additional service.

Junk removal services are by far the best option in terms of old furniture removal. Usually, they will send over an expert or two to determine the total price of the move, and once it’s agreed on, they’ll take away any large item directly to the designated landfill or recycling facility.

As stated earlier, if you can help it, don’t simply dump your old couch. There are plenty of ways you can repurpose or recycle it, and if it’s in a good enough condition, you can always donate or sell it. But if removal is the only way to go, hopefully this article has helped you figure out the best, most cost-effective, and most eco-friendly way of doing so. 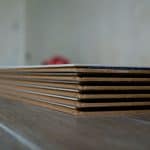 How Long Does Laminate Flooring Need to Acclimate?

How Much Does a Front Door Cost? (What Affects the Cost?) 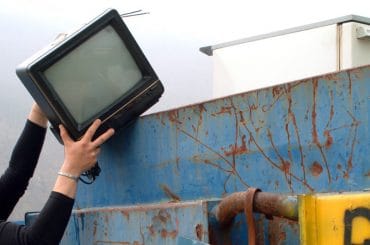 How to Safely and Responsibly Dispose of an Old TV 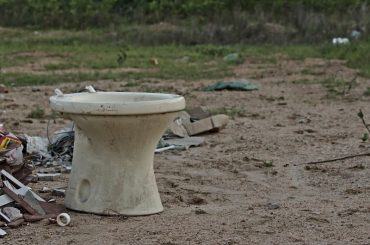 How to Dispose of an Old Toilet 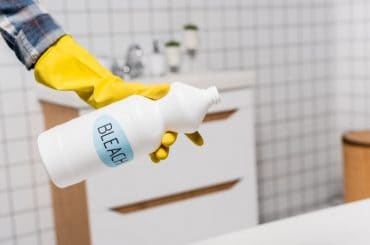 What Is a Safe Way to Dispose of Bleach? 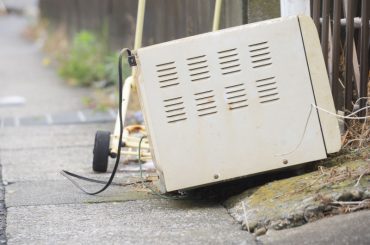 How to Dispose of an Old or Broken Microwave